The challenge code can be found here: https://github.com/google/google-ctf/tree/master/2022/misc-segfault-labyrinth 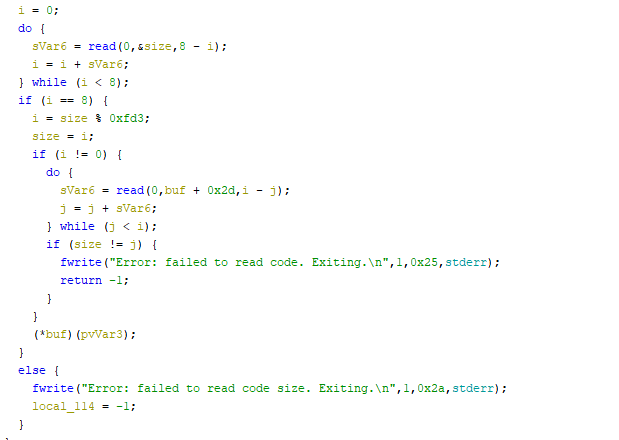 We also know that there are some seccomp rule implemented, so we dump it through seccomp-tools

That’s quite a specific list of syscall allowed. We know that the flag is read into the memory already, so we just need to find the location and then write it. From the code below we know that there is still a reference to the flag string on the stack, since the flag pointer is never overwritten again.

To start the exploit, I decide to checkout what state we have to work with when the code start executing our code. By sending “\xcc” as our shellcode, we can trap the process at the start of the shellcode. 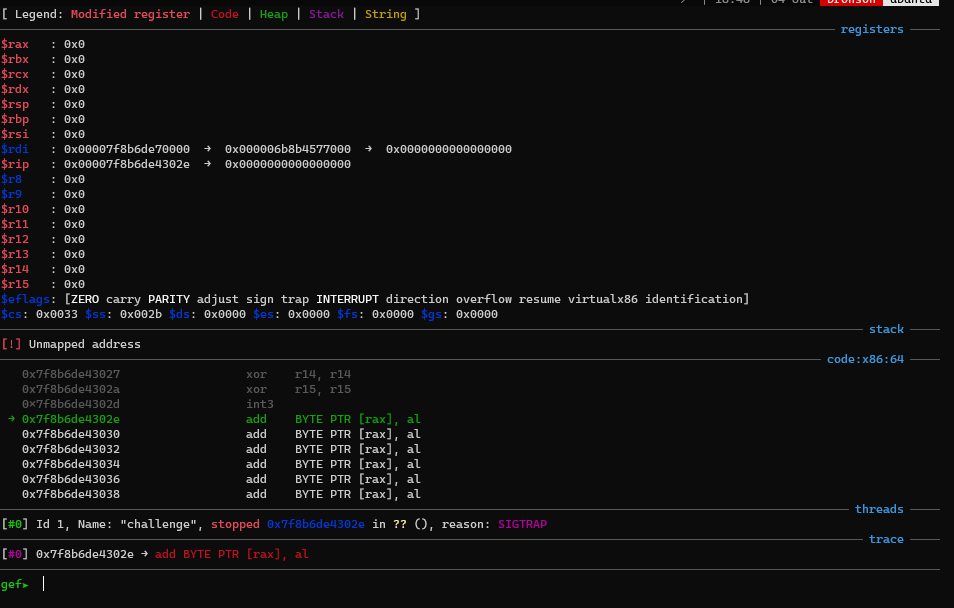 It seems like there wasn’t much to work with, only rdi is left, which doesn’t seems to point to anything useful. I start searching for ways to obtain a stack address, since then we can use a offset to the flag point and read the flag. Reading the blog post https://nickgregory.me/post/2019/04/06/pivoting-around-memory/, I know that if I leaked the libc base address, I can leverage the environment pointer to get to the stack. After that I’ll just need to find the offset from the environment to the flag to write it out.

So now, how do I get a libc address without any reference? Maybe somehow the syscall allowed can provide some useful information. From doing heap exploitation before, I know there is a common trick to leak libc address by mallocing a large chunk, which make libc use mmap to allocate the chunk (https://github.com/bennofs/docs/blob/master/hxp-2017/impossible.md).

If we call mmap with a null pointer as address, the kernel will decide where the new chunk should be placed at. Apparently the kernel tend to allocate chunks next to each other, though this is not guaranteed in the manual. From my understanding, since libc is mmaped by the loader, if we mmaped another large chunk again, the kernel will put it next to libc, so the offset to libc is fixed. 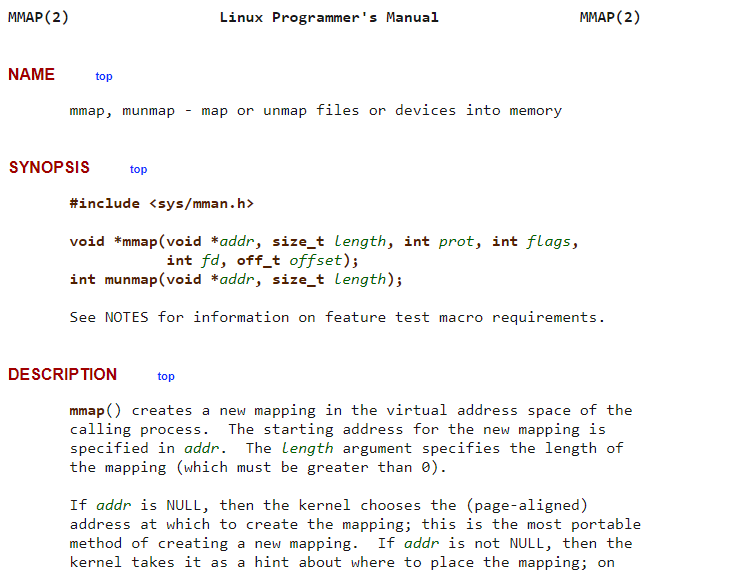 When testing this behavior, I notice that it worked if the chunk is large enough that it doesn’t fit into the gap between loader and libc. So I mmaped a 0x100000 size chuck to get libc, then used that to get libc environment point. After that it’s smooth sailing to print out the flag. The final shellcode is shown below. See appendix for the full exploit code.

P.S. While I am writing this write up, I notice that this wasn’t 100% consistent in the remote environment. It worked around 1/2 of the time, so just run it a few times if it doesn’t work.

When the code start executing, it allocated the structure shown in the graph. Each box represents a pointer, the box without an arrow points to a mmap chunk with no permission, and only one pointer within each chunk point to a readable and writable chuck. after 10 layers, the pointer point to the flag.

In order to retrieve the flag, we need to carefully navigate through this maze, as any segfault will end out attempt and close the connection.

So how do we distinguish between a readable/writable chunk from the other chunk? Directly accessing the memory clearly doesn’t work, as it would just raise a segfault error. How about syscall?

If we look at the man page for write, you will notice that if we supply a not readable address as buf, the syscall will return EFAULT, BUT IT WOULDN”T SEGFAULT!!

With this behavior, we just need to attempt to write out the content of the pointer, if it actually write out, then we know that chuck is readable, and we can advance to the next layer. This lead to the following shellcode.

The output is a little bit messy as the previous writes are also shown.